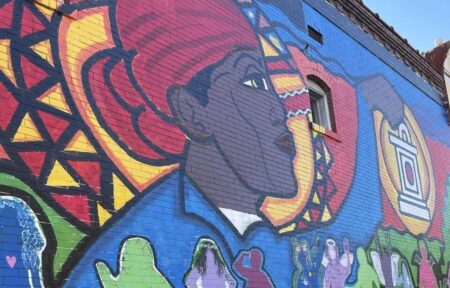 According to Dr. Carter, “Stand UP incorporates music, song, dance, and spoken word to celebrate the legacies of women and men who have paved the way before us. The performance includes a lineage tribute to Harriet Tubman and her indirect connection to the social justice emphasis embedded in the ideals of Philander Smith College.” Dr Carter was recently appointed Department Chair for Philander Smith College’s newly formed Visual and Performing Arts major.

The unveiling ceremony will begin at the Central Theater, 1008 Central Ave. with a scholarly lineup of presenters who will discuss the life and legacy of Harriet Tubman and the Civil War Era, then move down the street to the corner of Market St. and Central Ave. for a viewing of the completed mural.

The concept for the mural was proposed to HSACA who then commissioned Hurd for the Freedom honoring the heroic life and impact of Harriet Tubman. The mural project received a great deal of community support including R.E.G.A.R.D., Hot Springs NAACP and is significantly funded through private donations with the remainder of the funding from a grant from the Arkansas Humanities Council and the National Endowment for the Humanities.