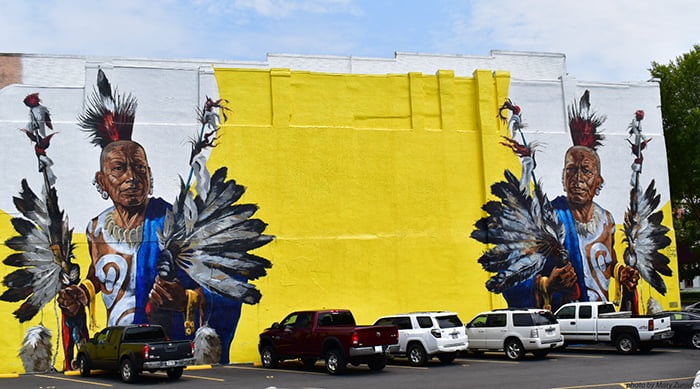 Quapaw Indian Mural by Pepe Gaka (Giuseppe Percivati)
Commissioned by the National Park Rotary Club, the Quapaw Indian mural is based on a painting by Charles Banks Wilson that was adapted as a mural by Pepe Gaka. Recognizing the history of Native Americans in the area, the mural was dedicated on October 18, 2017.

The Historic Baseball custom mural is entitled, “Playing Cards.” The image is a whimsical look back at the nostalgic players that make up the Hot Springs Baseball Trail doing what they do best, set into a bold graphic contemporary context. The diverse historical figures represented by their own iconic baseball cards include, Babe Ruth, Tour #11; Tell Ott, Tour #7; “Smoky” Joe Wood; Joackie Robinson, Tour #21; and Walter Johnson, Tour #16. The mural was created by Eyecon Studio artists: Chris Arnold and Jeff Garrison.

“Black Broadway” mural, located on the corner of Malvern and Church Streets, celebrates the history and culture of the Malvern Avenue region between Grand Avenue and Convention Boulevard which was referred to by some as ‘Black Broadway’ because of the celebrities and performers who once frequented the streets of the Spa City.  “Black Broadway 2” is located near the corner of Malvern and Grand Avenue  was inspired by the accomplished African American citizens of Hot Springs who lived and worked here.

Hot Springs artist Rayshaun McNary created his first mural on the side of the historic Webb Center located on the corner of Pleasant Street and Gulpha Street.

America Carillo created this colorful mural in 2018 on the wall of the Hot Springs Alligator Farm on Whittington Avenue.

Painted in 2017 by Kansas City, Missouri artist Phil (Sike Style) Shafer, and is located on the side of Emergent Arts at 341 Whittington Avenue.

While you are on Whittington Avenue, don’t miss this colorful mural painted by Zach Dryden, the third generation potter at Dryden Pottery. 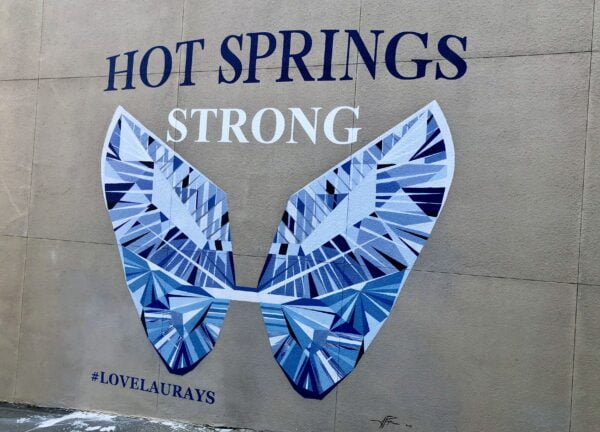 A gift to the people of and visitors to Hot Springs from the owners of Lauray’s, the Diamond Center located on the side of their business at 402 Central Avenue.